The Gig Economy Celebrates Working Yourself to Death

Last September, a very twenty-first-century type of story appeared on the company blog of the ride-sharing app Lyft. “Long-time Lyft driver and mentor, Mary, was nine months pregnant when she picked up a passenger the night of July 21st,” the post began. “About a week away from her due date, Mary decided to drive for a few hours after a day of mentoring.” You can guess what happened next.

Mary, who was driving in Chicago, picked up a few riders, and then started having contractions. “Since she was still a week away from her due date,” Lyft wrote, “she assumed they were simply a false alarm and continued driving.” As the contractions continued, Mary decided to drive to the hospital. “Since she didn’t believe she was going into labor yet,” Lyft went on, “she stayed in driver mode, and sure enough—ping!— she received a ride request en route to the hospital.” 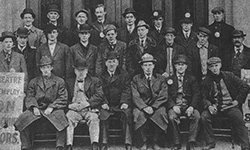